Case study: ThirdLove’s Secret to Getting Intimate With Customers

The online startup has upended bras with data science and is just getting started. 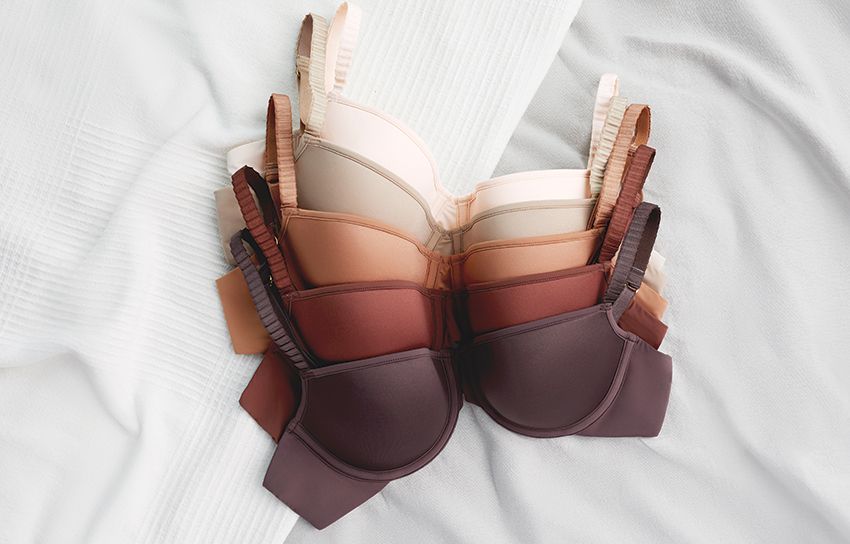 For decades, most women have had the same experience when it comes to bra shopping: They enter a dressing room and try on a variety of bras until they find one that fits (or is the least uncomfortable). And while bras come in different styles (push-up bra, sports bra, strapless), size options have remained relatively unchanged.

“It’s an industry that hasn’t been innovated very much until recently,” says Veronique Powell, vice president of operations at ThirdLove, an online startup that specializes in bras. “We’re talking about an industry where the latest major innovation was the push-up bra, which was introduced 30 years ago, yet it’s a product category that women wear every day.” 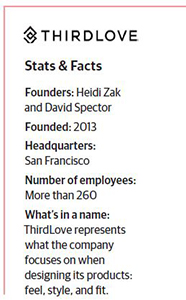 ThirdLove is the brain child of Heidi Zak, an MIT-educated former Google executive, and her husband David Spector, a fellow MIT alum and ex-Googler. “I saw a need in the market,” Zak tells Forbes. “I was in my early 30s and still shopping at Victoria’s Secret. But they never had a bra that fit me, because I discovered I was a half-cup size.”

Zak had a hunch that other women faced similar fit issues and set out to fill the void. In 2013, Zak and Spector left their jobs and launched ThirdLove. They worked with lingerie designer Ra’el Cohen, who became the San Francisco-based company’s first hire, to research bras and the women who wear them. They analyzed the fit of various brands, organized bra-fitting focus groups with hundreds of women, and even developed a computer-vision-technology app to help women find their bra size.

From their research, they concluded that over a third of women fall in between standard cup sizes. Armed with this insight and others, Zak and Cohen focused on creating bras with a better fit using half-cup sizes and memory foam, among other details. In spring 2014, ThirdLove launched its first online collection with seven different prototype bras.

To ensure customers were shopping with the right measurements, the ThirdLove app, which was built by an in-house team of computer vision and image recognition engineers, used a machine learning algorithm to analyze photos that a user took of herself in a tank top to recommend the brand’s bras tailored to her exact size. It wasn’t long, though, before other brands began imitating ThirdLove and offering bras in half-cup sizes. The company had to keep innovating to stay ahead of its competitors.

Building bras with data science
One of ThirdLove’s key assets is its data. In order to design a bra that fits a wide range of body types better than other brands, ThirdLove needed a deep understanding of its customers. The company already had a lot of information from focus groups, as well as insights into sales, returns, and customer feedback from its first launch. But the company considered design an ongoing process, and so it was important to keep collecting fresh data.

“Our fit gets better as we grow because of the data we collect and what we learn from customer feedback,” Zak states in a company blog.

And even though the app was incredibly accurate, “The reality was that not everyone wanted to download an app in order to shop,” Powell says. “We had to make it easier for our customers to find their best fitting bras and so we came up with a web-based solution.”

In 2016, ThirdLove introduced the FitFinder quiz on its site. The quiz asks customers a series of questions about bra brands and sizes that they’ve worn; how their current bras fit; which hooks they usually wear their bras on, and more. The answers are processed through machine learning algorithms to recommend the best size and style for each customer—and, ultimately, to help the company gain more insights into its customers’ needs.

Within two years, ThirdLove had collected approximately 75 million data points just from the quiz. The company uses that data to influence nearly every aspect of the business, from product development to marketing and sales. Every customer who takes the quiz, “makes us smarter,” Powell says.

The data also made it clear where the gaps remain. “Our primary goal is more styles in more sizes,” Powell adds. “Just this last June, we launched 24 new bra sizes [bringing its total number of size options to over 70] and we had about 1.3 million people on the wait list for those sizes. So there’s still an incredible demand for more bra sizes.” The average bra brand has about 36 size options, according to industry reports.

Despite the enormous role that data plays in ThirdLove’s decision-making, human ingenuity is another critical factor. As an example, Powell points to an early problem that the company encountered.

“Even though we knew we had this amazing product that fits women better than other bras, there was a reluctance to purchase a bra online,” Powell says. “It was just a matter of getting the bra into the customer’s hands.” As Powell tells it, several ThirdLove employees were pondering the issue when someone suggested letting customers try the bra before buying it.

The “Try Before You Buy” program ended up being an “instrumental part of our success that was born simply from a conversation that some of us were having,” Powell marvels. Based on its success, the company makes it a point to hold lunch-and-learn meetings where different teams can share projects or problems they’re working on to potentially seed more ideas to better connect with customers and improve operations.

Standing up to the “Sears” of brassieres
With an average price tag of $68, ThirdLove’s bras aren’t cheap. But Zak’s bet that women want bras in more sizes that they can try on at home is starting to pay off. At a time when consumers are turning toward personalized and inclusive experiences, ThirdLove has raised approximately $30 million in VC funding to date and experienced 450 percent revenue growth over the past two years. It was also named one of Forbes’ Next Billion-Dollar Startups for 2018 and included on the CNBC Upstart 100 list.

And while Victoria’s Secret is still synonymous with women’s underwear, its hold is increasingly tenuous. The lingerie brand’s hypersexualized underwear and nearly identical models (read: women with narrow waists and large busts) are anachronistic in an era marked by the #MeToo movement and body positivity.

Even though Victoria’s Secret has created its own online Fit Guide and uses similar terms like “supersoft fabric” and “memory fit lining” to describe its bras, it continues to run the same marketing campaigns it did decades ago. Since 1995, Victoria’s Secret has hosted a televised fashion show, which “illustrates how out of touch the brand still is,” writes Jefferies analyst Randal Konik in a note to clients. “With TV ratings that have been in free fall for years and a consumer that no longer resonates with ‘supermodels’ we question why the company continues to hold the show.” Loop Capital analyst Laura Champine dubbed Victoria’s Secret the “Sears of Brassieres.”

Meanwhile, other retailers have adjusted their brand message. American Eagle Outfitters’ teen underwear line, Aerie, markets its bras and undies for “every girl,” while more startups push their way into the underwear category. ThirdLove isn’t the only intimates brand championing comfort and a great fit—other online startups like True & Co. and Lively are touting similar messages.

For her part, Powell welcomes the added competition. “The lingerie industry is a $100 billion+ global industry that’s been predominantly run by men,” she says. “So it’s about time that we’re seeing underwear designed by women that’s truly for women.” 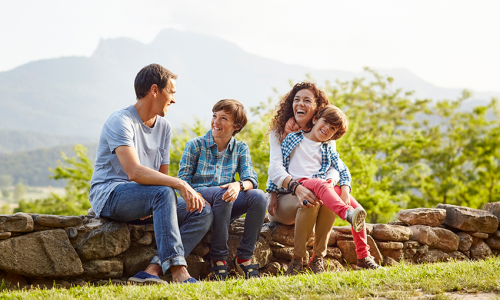