How customer-focused organizations use social media with unique customer groups.

Social media is the world’s largest platform for people to exchange, argue, and find humor in their opinions and interests. Facebook alone had 2.27 billion monthly active users in Q3 2018. That’s roughly a quarter of the world’s population.

But where do businesses fit in? As consumer usage rapidly grows, brands are taking to social media to express their values, introduce products, and launch initiatives. TechCrunch reported that more than 25 million active business profiles have flocked to Instagram, for example.

With so much noise on social media sites, brands must stand out to promote awareness and loyalty with unique and differentiating interactions. This can take on many forms, from funny tweets to sharing user content and artwork on their social media pages. Companies that know their audiences and seek to engage and create relationships with individuals are making the difference in customer experience.

“When customers walk away from an interaction and are smiling, they are not only associating that feeling with that one moment, but they are placing that emotion with the brand in their head and their heart,” says Jeannie Walters, CEO and founder of 360Connext. “That’s what leads to loyalty. Social media was made for this type of interaction.”

According to Forbes, one out of every four people who follow a brand may make a purchase from it. It’s up to each company to make the interaction count for every user.

“The focus of any organization should be around engaging with their community and creating conversations,” says Leila Samii, Ph.D., assistant professor of marketing at Southern New Hampshire University. “Social media has really disrupted the traditional approaches of marketing where it was primarily focused on selling the company first and focusing on the customer second. Today, the customer is first.”

Here are some top brands that are making every customer relationship matter.

Arby’s goes artsy
What do Japanese anime character Naruto and a steak sandwich chain have in common? These days they’re sharing social media posts. Arby’s, a popular American fast-food chain, has paired fan-loved anime, cartoon, and other pop culture characters with food across its Twitter, Instagram, and Facebook pages. This has taken many forms—elaborate cardboard cutouts, sharing user accounts dressed as characters, and anime drawings made with their sauces.

In a 2016 interview with the video game website Kotaku, Arby’s Senior Director of Social and Digital Media Josh Martin described this as a focus on engaging an audience on social media without selling. “So we went all-in on that premise,” he says in the article. “We focused on putting stuff out on the news feed that people would react to and find interesting and worry less about trying to push a product.” 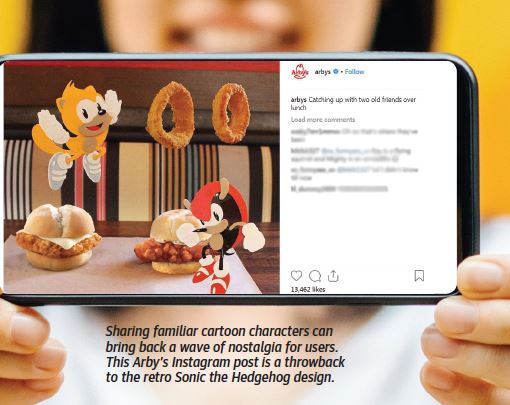 This has been a growing trend for many brands on social media that make it less about the product and more about the people. For example, Target shared a viral photo on Instagram of two children dressed as Target employees for Halloween, and L.L. Bean posted snapshots of hikers traveling the world. Brands are looking to be more authentic and connect with more unique and niche customer groups.

“Social media provides brands with an opportunity to put a ‘human face’ on their brand and enhances their ability to connect with their loyal customers in a more direct way,” says Dr. Elaine Young, a professor in digital and social media marketing at Champlain College. “…If they have good interactions, others will share those interactions, making the brand reach even more individuals who they might not have reached otherwise.”

Despite being a national restaurant chain with a broad customer base, Arby’s initiative to share niche content, such as video game characters who may not be initially recognizable to everyone, shows a dedication to creating individual and unique connections with particular fans of both pop culture and fast food.

Patagonia’s environmental outreach
American clothing retailer Patagonia has made it a mission this year to promote and share user social content around the idea of being active about environmental protection. As its Instagram bio reads: “Use business to inspire and implement solutions to the environmental crisis.”

One initiative it highlighted via social media was around information and individuals’ opinions on voting for public lands during the 2018 mid-term election. From a 10-year-old environmental advocate to conservationists, Patagonia showcased videos promoting what the brand believes is an important action to represent in an attempt to build awareness of the issue.

Andrew Selepak, Ph.D., director of the graduate program in social media at the University of Florida, has explored the use of social media in business and society. He described movements like this as a way for companies to stop focusing on themselves and what makes them so “great,” and instead inform audiences via social media how their individual relationship with the brand can be meaningful or informative.

“You are providing information and being a trusted reliable source, which therefore translates into people seeing you having a trusted and reliable product or service,” Selepak says.

This is also incredibly essential in a marketplace where social responsibility is growing. A 2017 study by Cone Communications found that 63 percent of Americans wish that businesses would take more charge on social and environmental challenges.

Wendy’s case of snark
Many people familiar with social media know about infamous tweets by Wendy’s. The fast-food brand was one of the pioneers of big brands using Twitter to roast users, poke fun at competition, and stay in touch with viral memes. Just in November it spared no expense when Kanye West tweeted about McDonald’s being his favorite restaurant. Wendy’s responded by tweeting, “I’m my favorite restaurant.” This is only the latest in years of snarky comebacks and re-tweets that both amused and mocked Wendy’s customers and the general public.

This is social media outreach on a different level for a major brand. Individual users who interact with this very responsive account may genuinely feel like they are talking to a real person. But it’s a gamble, as it may offend customers. So it’s important to know your audience before embarking on such a strategy. 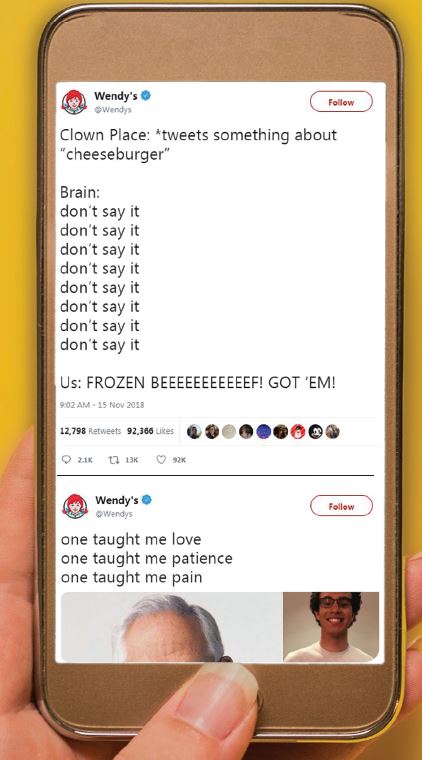 A study by Sprout Social found that three-quarters of people want brands to be funny on social media, but only a third want them to push the envelope with their comedy (think Wendy’s).

“Wendy’s is another interesting, but no longer uncommon situation,” says Samii. “The idea of ‘trolling’ on social media can be perceived incredibly negatively, but doing it creates attention and sometimes any attention can have a positive impact on an organization if it is done playfully. If audiences can find something funny, it makes the post exponentially more likely to be shared and go viral, particularly if it is done by a large organization.”

Wendy’s is about food and fun, and individuals who visit its social media site have come to expect this. Wendy’s has to recognize this too as it dishes out the jokes to users. “At the end of the day it’s all going to be dependent on your organization and knowing what you are, who your customers are, and what the industry is like,” says Selepak.

NewYork-Presbyterian Hospital stays on beat
Some companies are looking beyond the typical social sites to inspire and connect with users.

NewYork-Presbyterian Hospital released the Spotify playlist “Songs to do CPR to,” 47 songs running at 100 to 120 beats per minute, the same pace needed for effective CPR.

The curated playlist ranges from Justin Bieber’s “Sorry” to the classic “Stayin’ Alive” by the Bee Gees, giving users an interactive and informative look at a serious scenario with skills they can utilize. It succeeds in that crucial balancing act of being something fun for users to interact with while still having substantial meaning for what the hospital represents—saving lives.

A study by Wunderman found that 79 percent of buyers want to support a brand that cares about their needs. It pays to be engaging and caring, especially when customer health is concerned. And individuals want to see that a brand cares about others outside of the headquarters. Social media is becoming the perfect platform to have those meaningful sharing opportunities with a larger audience.

Make every social media post count to build customer loyalty
For brands to survive in the digital age, having a unique and meaningful social media presence is quickly setting brands apart. Individual engagement with customers has tangible impact, and a brand can truly step up on places like Twitter, Facebook, Instagram, and elsewhere. 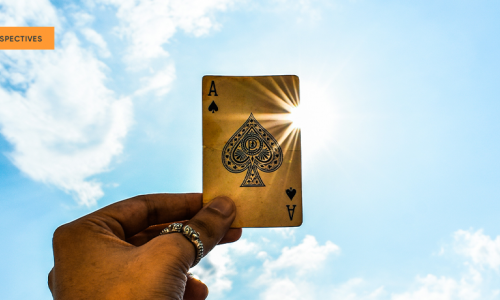 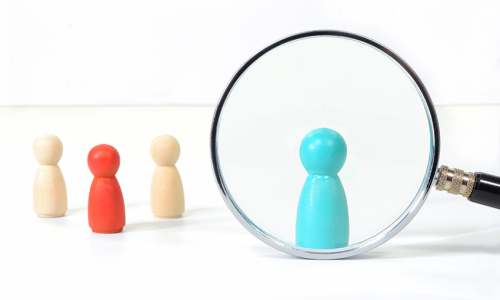 Article Take the mystery out of customer satisfaction See More