Eight popular initiatives that are being used by mobile telecom operators globally.

> Example: Vodafone has a successful 'Data Test Drive' campaign to allow people to experiment with using 3G mobile data, and at the end of the month suggest the best plan based on their usage patterns.

Staggered data plans can be implemented in emerging markets, such as the Philippines and Indonesia, where the majority of the subscribers are spending in small amounts and do not want to make long-term commitments for data plans.

> Example: NTT Docomo offers postpaid pay-as-you-go users the capability to switch over to volume-based plans if they exceed a certain data limit.

Operators can offer specific discounts at the right time to reduce traffic congestion and modify subscriber behavior to consistently use mobile data. This will be effective in emerging countries such as Philippines, Thailand, and Indonesia where subscribers are price sensitive and promotion driven.

> Example: AXIS Indonesia offers 'pay-to-boost' speed where users pay a small fee to increase their mobile data once they have reached their data limits and experience 'throttling.' MTN Africa offers 1GB to 'Night Owls' who typically browse late at night or early in the morning.

Bucket pricing presents opportunities to increase share-of-wallet and save costs for both mature and emerging markets. Operators need to educate consumers about bucket plans and find solutions for the increased complexity in service provisioning and billing.

> Example: AT&T USA is aggressively pushing bucket plans for multi-devices under one plan where additional devices can be easily added to a data plan. Reliance India is promoting its family bucket plans where each family is given 3GB of data in addition to free talk time that can be shared among three subscribers.

Education campaigns help operators from emerging markets promote awareness and improve consumer understanding on the available plans and the benefits of mobile data on their daily lives.

Wi-Fi bundling can be used as a strong value proposition to move subscribers to volume-based plans or as an add-on service. However, operators should ensure the proper availability and quality of their Wi-Fi service and allow subscribers to seamlessly connect.

Facebook-type (FB) packages can be used as a hook to lure subscribers to use more mobile data. Indonesia, Thailand, and the Philippines are good examples where social networking has become very popular, and operators from other regions should explore this.

> Example: Globe Telecom in the Philippines is leveraging social media packages that include access to Facebook, Blackberry, and Google mobile services for a promotional period.

Reverse handset subsidies allow operators to collect payment for devices upfront and give back a portion of the value monthly in the form of a rebate for free voice and data services.

> Example: MTS India offers potential subscribers a choice of two models of smartphone. Subscribers pay the full retail price of the handsets. In return, they get a monthly rebate in the form of free voice, SMS, and mobile data over a period of 12 months that exceeds the original price of the phone. 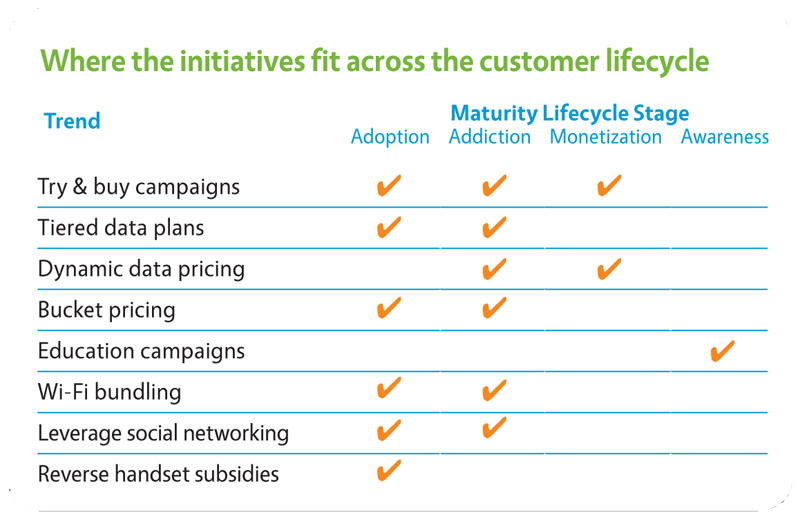