Simplicity and a valuable customer experience trump technology in the long run, even for a popular app like Shazam. 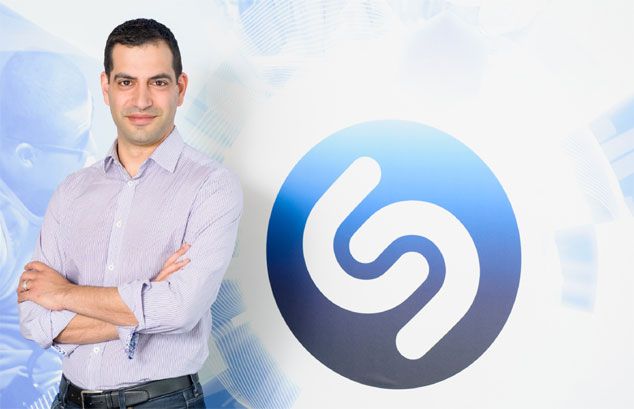 Many of us are on a quest for immediate gratification. We live in a world where it's normal to get what we want almost as soon as we think of it. This includes products, services, and information. Rarely far from a source of information—whether a computer or a smartphone—we're able to map our journeys, search for anything we want within a geographical area, and read reviews before stepping foot in a store. Got a question about a fact or figure? Google it, or get a relevant app.

It seems like now there's an app for everything. One of the most popular is Shazam. It's used to identify songs that may be playing in a store or during a commercial. But the company has expanded beyond just trivial fun. The company makes money through a premium version of its app, as well as partnerships with music services and advertisers (Apple Insider values each ad campaign it runs at between $75,000 and $200,000). It is now embracing the two-screen experience many users have while watching television, offering engagement metrics and other B2B services around its "autotag" feature. Daniel Danker, Shazam's Chief Product Officer, explains that technology companies cannot simply create a cool feature and then sit back. Instead, they need to put themselves in customers' shoes and use technology to their customers' benefit.

Daniel Danker: Since its inception, Shazam has always been consumer first. From answering the basic question, "what's that song?" to keeping the main screen simple and streamlined—with a single button that says "Shazam Now"—Shazam is incredibly easy for the consumer to use. Since its launch as an app, Shazam has also offered other great features that customers love such as videos, lyrics, and links to streaming sites like Rdio. And because we keep the customer experience front and center of everything that we do, it's reflected in our user base, which is now more than 325 million people in 200 countries, growing at a rate of 8 million new users each month. 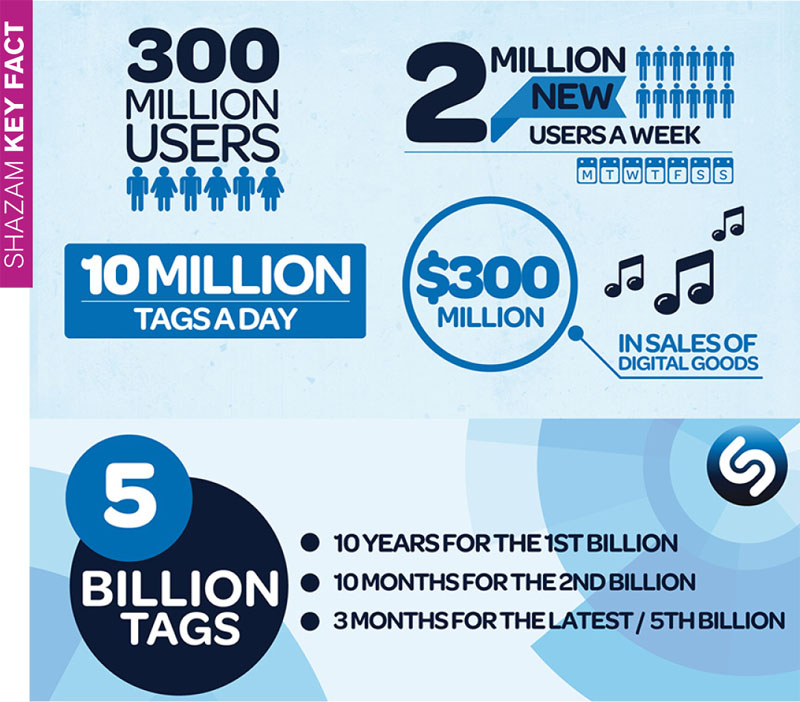 CS: Why is it imperative for your organization to provide an optimal customer experience and be customer-centric?

DD: It is far too easy for technology companies to be like Narcissus and fall in love with the reflection of their own technological capabilities. Just because your programmers can create a cool feature doesn't mean that your users will want to use it. Or even understand it. Which is why it's imperative for every company to always ask themselves: "Why are we adding a particular feature?" "Is that new feature easy to use?" and "Can you take one look at it and understand its value?"

CS: Shazam's app, allowing mobile users to identify a song, was initially seen as a novelty. But with 325 million users in more than 200 countries, Shazam is clearly popular. To what do you attribute this success?

DD: Shazam was available in 2002, even before the advent of smartphones and apps. All people had to do was dial 2580 and hold their phones up to the music source, then Shazam would text them with the name of the song and artist. But, it was when Shazam launched as one of the original offerings on the App Store that the company's growth really took off, primarily because it was one of the apps that people used to love to amaze their friends with. Since then, Shazam still amazes and word of mouth continues to drive much of our growth as people love all the cool things they can do with the app, including engaging with the music, advertising, and television shows they love. (Shazam doesn't have an advertising budget).

CS: How do you use customer insights to determine what your customers want, identify successes, and address problems?

DD: Shazam believes it's important to keep an open dialog with our users around the world, so communication with the people who use our app is paramount. We have a number of different channels that we use, from email to social media to customer surveys, so that we know what they like and where we can do better. 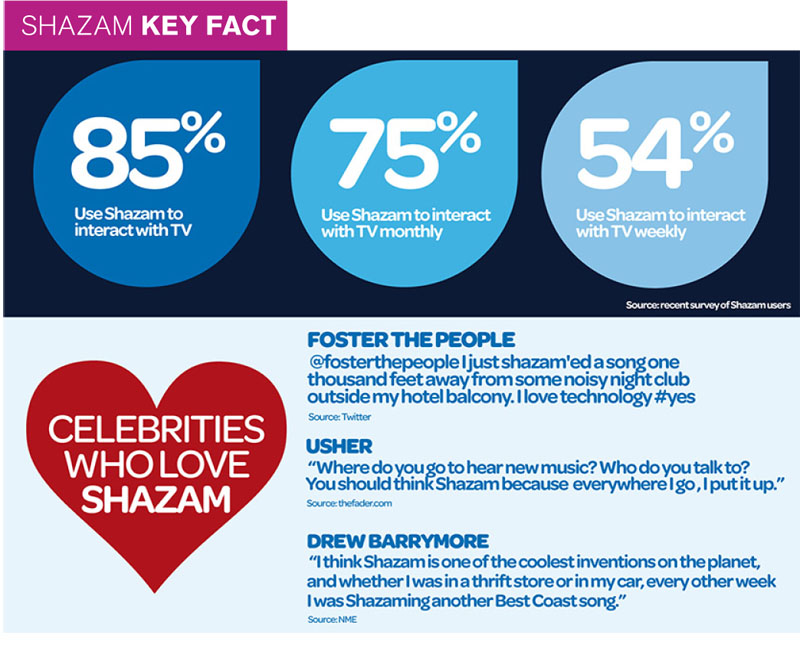 CS: The second screen phenomenon has taken the world by storm. How has this helped your organization grow?

DD: Since Shazam was launched to the public in 2002, people have always used the service with television to find out the music featured in their favorite shows and ads. So, it was a natural extension for the company to move into television shows and advertising, enabling people to use Shazam to tag them for more information, more content, and a more engaging and satisfying experience. People can use the app with every program on 160 channels in the United States to get more information on the show and the cast including news and gossip, music featured in the show, a Twitter feed on the show, and other fun features.

Since we've moved into this new service, we have also Shazam-enabled more than 250 ad campaigns in 28 countries for global A-List brands like Honda, Pepsi, Sony Entertainment, Procter and Gamble, and many others. We've seen millions of people use the app to engage with brands, spending upwards of three minutes engaging with the products that interest them. All this gives people more reason to use an app that they already love.

CS: Conducting business from the customer's point of view opens up previously unnoticed opportunities in just about every industry. For example, there has been talk in the media about Shazam expanding into the fashion world. Hypothetically, what would an improved experience look like?

DD: Fashion houses could quite easily work with Shazam to make their catwalk shows Shazam-enabled. In fact, right after the clothes featured in catwalk shows, the music is the next thing that people talk about. Fashion houses could partner with Shazam to incorporate information about their new line or other products so that when people use Shazam to tag the music in the show, they are able to browse the styles they see or view scents, accessories, or other items.

CS: How are you using social media to help build a loyal customer base?

DD: Social media offers an excellent way to open a dialog with your customers—not just about the service, but about the things that they love. For instance, Shazam's music team posts Tweets, Facebook, and Google+ items about the artists that are doing well on our charts, emerging artists that we are spotlighting, and other fun information. This not only starts a conversation with our users, but also reinforces that Shazam is the app that they want to use with music. Social media also gives Shazam the opportunity to talk directly to our users about new features and how they can use them. Plus, customers are using our social media channels to ask questions and offer suggestions. It really is an ideal channel for two-way conversation. 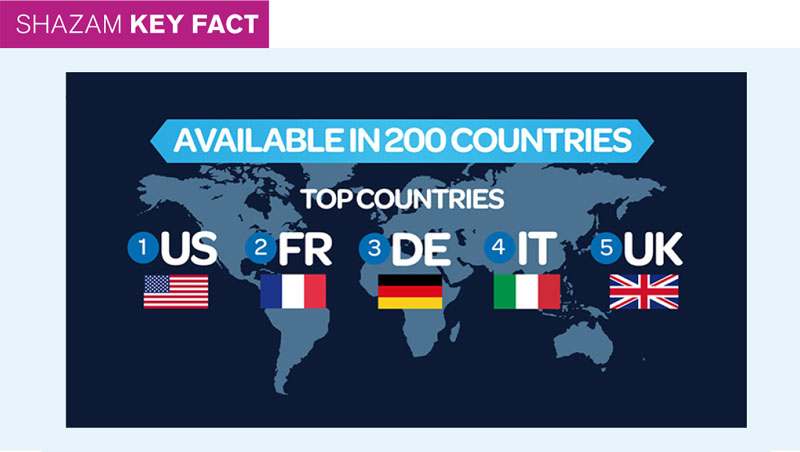 CS: Many consumers are becoming technology savvy. How does Shazam remain ahead of the curve in order to wow customers with new innovations?

DD: The technology that drives Shazam truly is amazing, but the goal of the app is to make it easy for everyone to use. Open the app and you see one giant button, "Touch to Shazam" and it's that simplicity, that elegance that people love. While we are always looking for innovative ways to use the app, we will always make sure it's easy for our customers to understand and use.

CS: What are the priorities and challenges in remaining a forward-thinking company?

DD: A good app is never "done." I think the priorities and challenges are to make sure that we have the best people developing the app who are constantly finding new opportunities for people to use the app.