J.D. Power III, who pioneered customer satisfaction measurement in the automotive industry, looks ahead with his son J.D. Power IV to the factors that are shaping customer experience going forward.

Customer experience in the automotive industry has certainly evolved since J.D. "Dave" Power III founded J.D. Power and Associates with his wife at his kitchen table in 1968 and built it into a household brand. When Power and the company first began evaluating customer satisfaction within the automotive experience, the top issues many customers cited at that time centered around vehicle performance. Customers then turned their attention to more nuanced, experiential attributes. Today's customers are most satisfied with vehicles that are safe, reliable, and provide a superior experience for drivers and passengers.

Power has had an extraordinary impact on helping the automotive industry recognize the importance of listening to the voice of the customer, which is captured in a new book entitled Power: How J.D. Power III Became the Auto Industry's Adviser, Confessor, and Eyewitness to History. Power's 50 years in the business gives him a unique perspective on the auto industry's relationship with customers. Here, he and his son J.D. Power IV (Jamey) speak to Customer Strategist about the history of the automotive customer experience and how it continues to evolve. 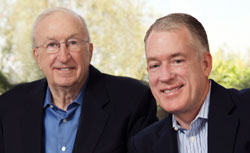 Customer Strategist: What are the most dramatic ways that the automotive customer experience is changing around the world?

Jamey Power: The number one maxim that continues to hold true is that customer expectations keep rising every day. And it's not just in the U.S.—it's all over the world. As customers are increasingly exposed to a higher quality of service, their expectations get reset. What was acceptable in the past is no longer acceptable today, and furthermore won't be acceptable in the future if the providers don't continuously adapt to those rising expectations.

CS: Can you point to automakers that are making great strides with customer centricity?

JP: Across the board, we've noticed that car manufacturers have become more focused on the customer. Everybody is doing it now. It's now more a matter of to what degree they are doing it. It's hard to point out one car company that's doing a stellar job.

One of the stories highlighted in our book is Hyundai as a worst-to-first type of story. They were doing so poorly in the late 1980s and 1990s in terms of quality. But, the new chairman at the time provided the strong leadership they needed to succeed in the U.S. market. The first thing they focused on was the [quality] problems. As they got a handle on that, they focused more attention on design, adding features, and being more in tune with what customers were asking for in the U.S.

Companies such as Toyota and Honda have been doing this since the early 1970s. So it's hard to neglect them since they've been doing such a great job for so long.

CS: What are some of the top considerations that automotive executives overlook when it comes to customer preferences and interests?

JP: One of the things that has been troublesome in the U.S. is that the technical sophistication of some of the computer interfaces [in vehicles] have been problematic and well documented. You can't let the technology get too far ahead of the customer. We've seen time and again that some automakers release sophisticated technology that isn't ready for prime time. When it's not ready, car companies frequently pay the price. Car makers can underestimate the need to have the features, the product, and the system ready for the customer, and not assume that a salesperson at the dealership can educate the customer on how to make it work.

Dave Power: For example, Ford's Lincoln vehicles have gone back to using knobs [instead of a touchscreen for its in-vehicle command system]. You have to look at the age group you're dealing with. You can lose customers if you come in with too fancy a layout of the interior of the vehicle.

CS: Why is it so important for automotive leaders to listen to the voice of the customer?

DP: Because the consumer is so much better educated and knows more than the executives in the car companies. They won't recommend or re-purchase cars if even small issues don't get resolved. Germans introduced the first disc brakes, for instance, and they squeaked. Americans didn't like pulling up to a stop sign or a light and have the brakes squeak. It was difficult to get German car makers to understand why this was important to American consumers.

And when Peugeot introduced the first fuel injection system in the U.S., company executives couldn't understand why people were so upset with it. It turns out that in the Northeast, people were accustomed to pumping the gas pedal to get gas into the carburetor to  start their car in cold weather. When they used a Peugeot, it flooded the engine and the car wouldn't start. That was a big inconvenience to them. Yet the head of engineering at Peugeot said that it was the consumers in the U.S. that had the problem, and they have to learn how to start the car.

JP: To our knowledge Peugeot never modified the fuel injection system. The company felt that it was better to try and get the sales people to "train" the customer. Peugeot was never able to gain substantial market share [in the U.S.].

CS: These are great examples of how customer experience preferences differ between Europe and the U.S. What about elsewhere in the world?

JP: In developing markets, customer expectations are not as advanced. In many cases, they haven't been as exposed to things that consumers in developed markets have experienced. [In emerging markets)] a lot more education is required to help the customer understand what to expect with owning a vehicle. In markets like India, China, and Vietnam the educational process is important, such as why you should change your oil regularly. In developed markets like the U.S., Europe, and Canada, the education process is centered more around features and sophisticated controls.

CS: How has customer data evolved as an executive tool for automakers?

DP: In the early days, auto executives would deny that they had any problems. And when they did start doing research, the information wasn't always accurate. By the time an [internal] market research project was done and filtered through the organization, it was nothing like what the original report looked like. It was massaged to make it report on what top management wanted to hear, so the negatives were never brought to the forefront.

But that has changed. [Auto company] leadership and the press now relay a mix of internal and independent findings, such as our customer satisfaction study, to deliver the real message to top management.

CS: What customer-centric metrics should automotive executives use to measure success and identify problems?

DP: Customer satisfaction and Net Promoter Score (NPS) are measured and acted on by virtually all [automakers] now. Everyone has religion now. It's way different than it was even 25 years ago.

JP: It's not that executives aren't looking at all the right information. But it might be confused and cluttered because there are so many different metrics out there. Senior management and the board have tried to reduce it down to a simple number. The risk of that is that it gets dumbed down so much it doesn't really tell them anything or it doesn't really inform them if performance is getting worse or it's a false indicator of their company's financial health. For instance, they might be looking at customer satisfaction on a four point scale and they may combine three of the data points to give a false sense of performance.

CS: What are some best practices in customer centricity that automotive executives can apply from companies in other industries?

JP: As a society and as a culture, we used to look at things in a very isolated way. If you bought a car it was an automotive industry experience. But as consumers have become more aware and smarter with their expectations rising, the different types of experiences influence all the services and products you interact with. If I stay at a Ritz-Carlton or Four Seasons hotel, I get accustomed to the way I'm treated there, especially the personalization. Why shouldn't I expect the same from my Lexus or Mercedes dealer and automaker?