article |
The Vision of the 2020 Customer Becomes Clear

Past Predictions of Future Customer Experiences

Consumers today have easy access to products and services. Their experiences are personalized, relevant, and in some cases, predictive. Yet the technological advances we now take for granted were once nothing but outlandish ideas.

People love to make predictions, including predictions about future customer experiences, technology, and interactions. More than 100 years ago some envisioned (very correctly) what life would be like today. And although predictions such as "a flying machine for travel" and "moving pictures sent by wire" were correct, some are downright laughable.

So before we bank on a vision of the customer future, let's revisit past predictions of future experiences…

In 1900, John Elfreth Watkins Jr. wrote an article in the Ladies Home Journal entitled "What May Happen in the Next Hundred Years."2 He correctly discussed the age when "wireless telephone and telegraph circuits would span the world. A husband in the middle of the Atlantic would be able to converse with his wife sitting in her boudoir in Chicago…without the intervention of a 'hello girl.'" But he also thought there would no longer be a need for the letters C, X, and Q in our everyday language, because spelling words by sound would be adopted. Clearly that was proven to be a quixotic idea.

Watkins also envisioned Americans solely eating ready-cooked meals that would be purchased from bakery-like cooking establishments and delivered through pneumatic tubes or automobile wagons. Purchasing your own food or having a personal cook would by 2001 be an extravagance. 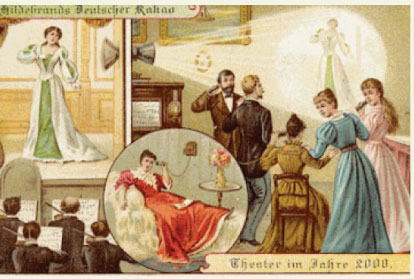 That same year Richard LeGallienne of the San Francisco Examiner predicted that "some Edison of the future," would create a device in which "a writer could record his thought without the medium of words at all, and by which, on the other, the reader could receive them equally without words or print."

And in the February of 1952 issue of Galaxy Magazine, Robert Heinlein predicted that by 2000, "your personal telephone will be small enough to carry in your handbag." The U.S. cell phone market had reached nearly 110 million by 2000.

Theodore Waters of the New York Herald predicted the ubiquity of business travel and commuting way back in 1900. Well, sort of. "The owner of a [flying] machine…could live 500 miles away and yet do business in the city day by day, going by air line to his home each night."

He also thought that there would be underwater submarine transportation routes that would be "famed for its freedom from seasickness and the wonderful views it provided of sea monsters." 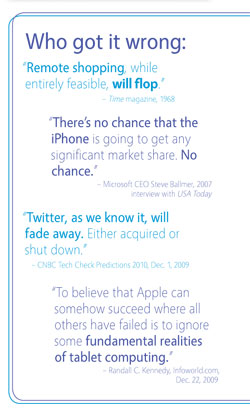 Waters was unfortunately too optimistic about cures for still common diseases. "That there will be drunkards is probably out of the question. … Cancer, which is rapidly passing tuberculosis in the race for the human race, would be stamped out, because its first appearance could be guarded against. The same would apply to other maladies. Ennui might be the principal disease."

Heinlein's 1952 predictions were similarly positive, though unfortunately incorrect. "Cancer, the common cold, and tooth decay will all be conquered; the revolutionary new problem in medical research will be to accomplish 'regeneration,' i.e., to enable a man to grow a new leg, rather than fit him with an artificial limb."

National Public Radio reported that back in 1989, British company Applied Futures envisioned 2010 to be one of consumer control. "The emphasis of the markets will have moved from supply-push to demand-pull: the customer really will be king and he will expect his every little whim to be catered for."

Famous futurist and author Ray Kurzweil embedded technology into the concept…literally. In his 2006 book The Singularity is Near, he said that by 2010 "computers… will become essentially invisible: woven into our clothing, embedded in our furniture and environment." Cue Google Glass and Samsung's smartwatch.

Computers play a major role in many recent futurists' predictions. In 1997, Faith Popcorn told InformationWeek that by 2010 a computer would "act as an extra brain" in everyday life. Based on the popularity of smartphones, she was right.